On Public Opinion: Responses to BANGed is a book based on seven months of exchanges between feminist artist Angela Washko and the "internet's most infamous misogynist" (a pick-up artist, author, blogger and notorious manosphere leader). The book uses the format of public commentary - from comment sections of mainstream news sites, to the pick-up artist's community forums to Twitter to the artist's Facebook feed and more to look at the many narratives that developed around Washko's investigative art project BANGED.

The book tells this story from the perspective of everyone invested in the project except for the artist herself and serves as a testament to our contemporary condition of increasingly disparate bubbles that exist online and elsewhere - creating their own vernaculars and developing radically different ways of viewing the world. It is also a document analyzing reactions to Washko's experience shifting from activism to ethnography in spaces of extreme hostility toward women and feminists.

The book is 209 pages long and comes with a signature and handwritten edition number. It is an edition of 300.

If interested, please also see the accompanying book BANGed: A Monopoly on Truth, which features the essays and interviews Angela Washko has produced in conjunction with the project.

(*This book may take up to 15 business days to arrive after your order.) 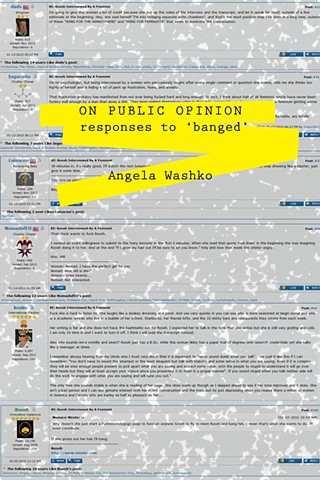