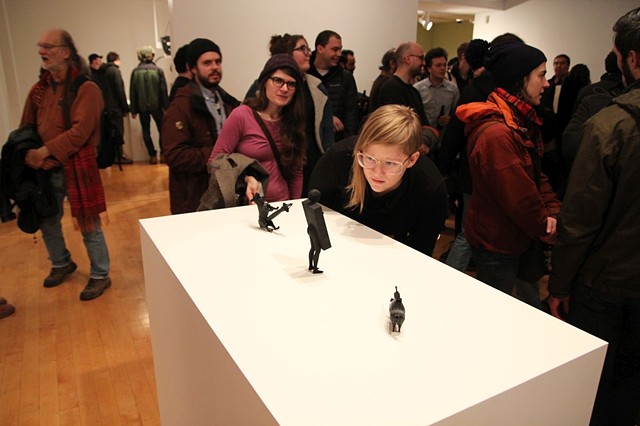 Dark Matter is a series of combined, sculptural objects modeled in Maya and 3D printed to form humorous juxtapositions.; The objects chosen for the first series are the objects/things that are banned or un-welcome in Iran by the government. The objects that in many other countries people use or own freely but under Iranian government laws (for several reasons) are forbidden or discouraged to use. Owning some of these objects/things (dog, dildo, gun, necktie, satellite dish, etc.) means going to jail, or getting a fine, or constantly being under the risk of getting arrested or bothered by the moral police. By printing and bringing the virtual 3D into physical existence, I want to simultaneously resist and bring awareness about the power that constantly threatens, discourages, and actively works against the ownership of these items in Iran. No matter how functional, through 3D printing, I am able to re-create and archive a collection of forbidden objects. In a way, the sculptural objects serve as a documentation of lives (my own life included) lived under oppression and dictatorship. This is the documentation of a history full of red lines drawn in the most private aspect of one’s life.

What will happen when you re-contextualize the forbidden/banned/taboos? Could inserting the sculptures into another time and space change our relationship to these objects and challenge us to enter an historical dimension of the work? In other words, through positioning the tabooed I want to re-emphasize the dramatic and ironic aspect of forbidden; When looking back in twenty years, how would it feel to re-visit this collection?